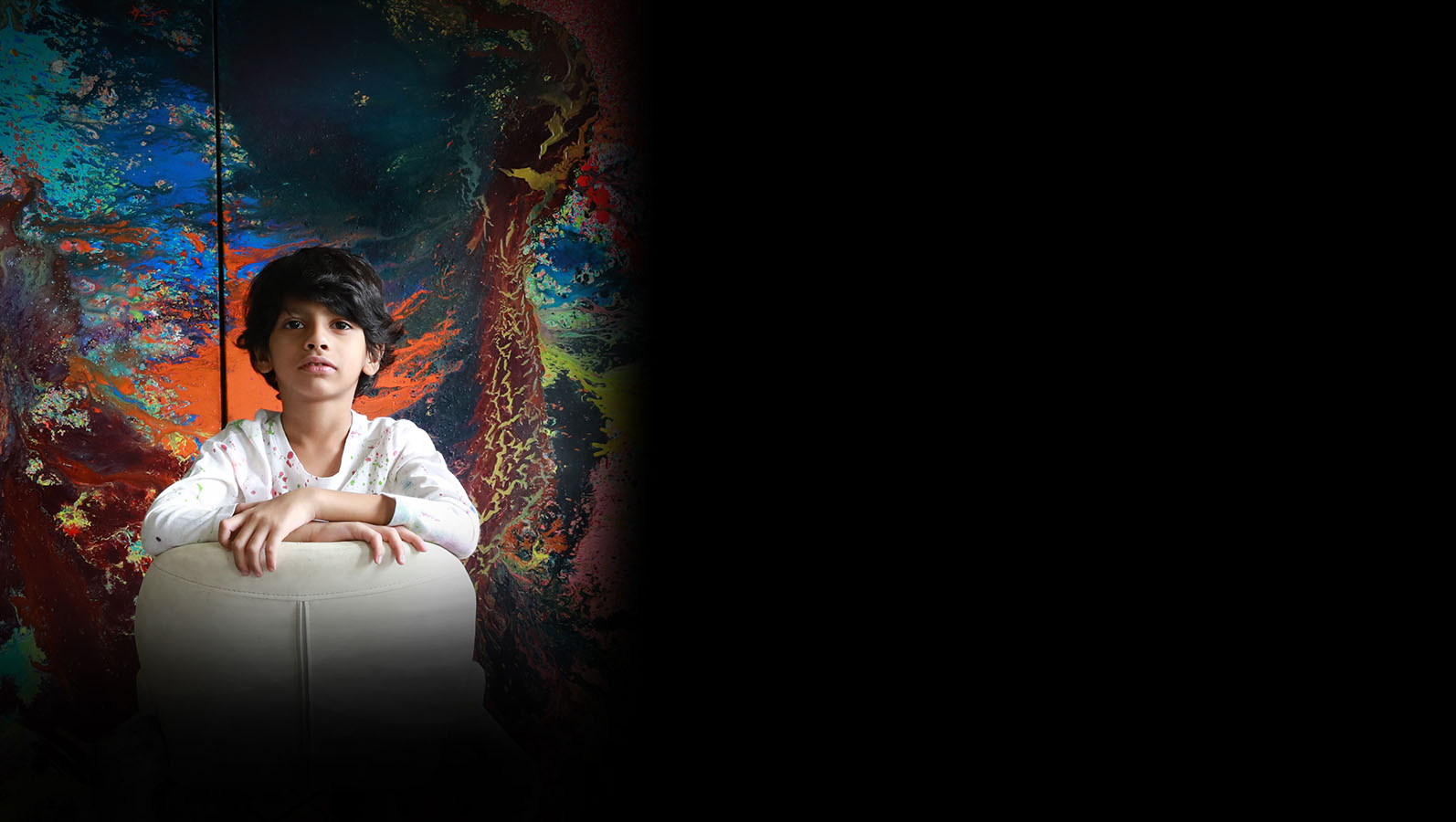 If there was a monarchy for colours and colours only, Advait would be its prodigal caliph. Such a comparison is only befitting to the seven-year-old who started painting since he was not even a year old. He channelizes this fantastic imagination through the canvas in colours and combinations that are well beyond his years. The word “prodigal” fits his passion in true sense, which flourishes by the day with utmost sincerity.

If there was a monarchy for colours and colours only, Advait would be its prodigal caliph. Such a comparison is only befitting to the seven-year-old who started painting since he was not even a year old. He channelizes this fantastic imagination through the canvas in colours and combinations that are well beyond his years. The word “prodigal” fits his passion in true sense, which flourishes by the day with utmost sincerity.

His contemporary ingenuity evolved to perceive the universe and oceans with ease through gestural abstractions. His mother gave him food colours to play with initially, following which his imagination flourished; breaking boundaries, Advait’s flight on fancy was unique. Advait takes pleasure in branching out, evolving his art to continually find new challenges and techniques to achieve his vision on canvas. His art is organic, born from various tools, brushes, and occasionally even with fingers, as it weaves his inspirations and thoughts in a conversational tone.

The rhythm in his paintings is noticeable for he can distinguish many hues of a single color. The themes are meditations of the world that he dwells in — of dragons, galaxies, birds, flowers, sea creatures, dinosaurs and so on. These subjects have a tendency to evolve, pursuant to fancies of a young mind. The artistic narratives achieved greater proportions with subjects like the grandiloquent Big Bang, awe-inducing black holes, imaginative aliens and even invention of his dinosaur species like the ‘Electrosaurus’ that radiate currents in multitude of colours.

The said, the style of painting is acquiring certain etiquette. By spreading the colour on his body first before pouring it on the canvas, Advaitgauges the tone and texture and then begins organizing them. His vivid use of colours — the bold splatter and dreamy framework — is a reflection of his actions, his keen streak of arranging and shaping things affects the way he spreads the colours on canvas.

These paintings have been a part of the global discourse. The narrative of his exhibitions takes the viewer on a journey of personal growth, inspiration, and the intense creativity of a prodigal artist. So far, he has shown his work in USA, Canada and India.

The globetrotting won him the Global Child Prodigy Award in 2020, where he was selected from among 15,000 participants. Several other artists heaped praises at Advait’s artwork, with most of it deeming it to be a natural departure from traditionalism that is imbued with originality. Its kaleidoscopic nature where one sees imagination collide with reality was termed as a “phantasmagoria” of paints — an effective use of colours that would have been risky otherwise.
The press has written about him on many occasions with international media showering praises on his artwork. BBC has called him an “art prodigy”, CTV news called him “special” and so on.

Advait is rooted in India with his family. They keep travelling outside the country frequently. With much encouragement flowing from all corners, Advait — besides being an artist — dreams of becoming a palaeontologist, to be able to make practical discoveries about dinosaurs.

Thank you! Your submission has been received!
Oops! Something went wrong while submitting the form.
No items found.